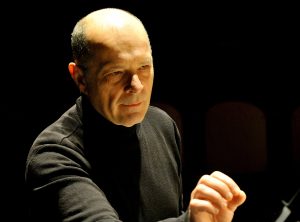 Miki Skuta – one of the most important representatives of Slovak piano art. He studied in Bratislava with Doc. Eva Fischerova, and in Paris with Claude Helffer.

He has performed in several international festivals (of classical as well as jazz music) in Slovakia and abroad:

Apart from a great number of recordings having been made for the BMG, Amadeo, OEHMS Classics , ORF, Preiser Records, Slovak Music Fund, Skuta recorded 16 Beethoven’s Sonatas (Opus ), the Diabelli Variations ( Pavlik Records ) and the Goldberg Variations for Hevhetia.

For this recording, he received the highest points (2×5*) by the BBC Music Magazine and it was being compared with the cult recording by Glenn Gould from the year 1955. As a result of this evaluation, he was offered to make his recital debut in London and in Paris . His next CD (2005) again with works from Bach (Toccatas, Chromatic Fantasie and Fugue, Italian Concerto) received the same rating in the same magazine one year later.

He was artistic director of the International art festival “Arcus Temporum” in Hungarian Pannonhalma. He is laureate of the “Cristal Wing prize” , the “Frico Kafenda prize”,
and of the “Hungarian Music Award – Slovakia”.

Since 1993, his compositions have been presented in Austria, Germany, the Switzerland, Hungary, France, the Netherlands, at approximatly 100 concerts. In 2005, he was ordered to compose the violin concerto for the Austrian violinist Benjamin Schmid.

In 1996, Miklós Skuta and his wife Nora Skuta formed the Skuta Piano duo and since that time they have been focusing on rendition of the 20th century music.