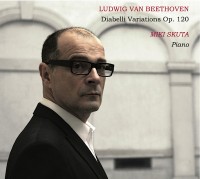 Beethoven was forty-eight and he was in the middle of composing the vast Missa solemnis when, in 1819, Anton Diabelli, the Austrian composer and publisher, sent to distinguished and promising composers an invitation to write a variation on his waltz theme. The list included Beethoven, and also Carl Czerny, Johann Nepomuk Hummel, Friedrich Kalkbrenner, Wolfgang Amadeus Mozart Junior, Franz Schubert, Archduke Rudolf of Austria and, on Czerny’s recommendation, eleven-year-old Franz Liszt. Diabelli named the project Vaterländischer Künstlerverein and his aim was to use the money, raised by the sale of the collective work, to benefit the widows and orphans of the Napoleonic Wars. Beethoven seems to have snubbed the offer at first, dismissing the theme as a “cobbler’s patch”, but we have no first-hand information of this, and eventually, he accepted it and by summer of that year he had completed twenty-three variations of the cycle that was to become not only his greatest achievement in the technique of variation but also a gem of the whole piano repertory.